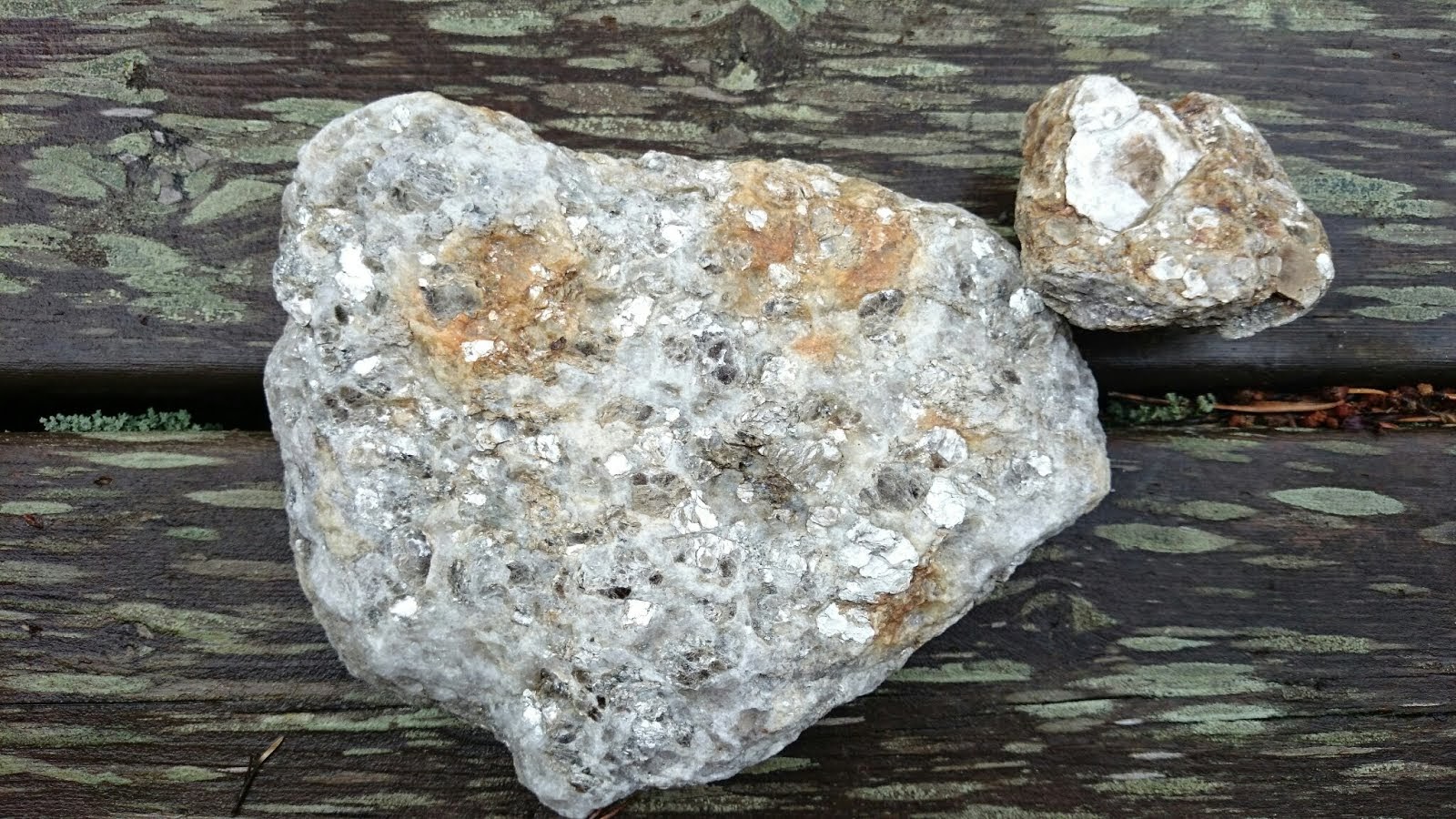 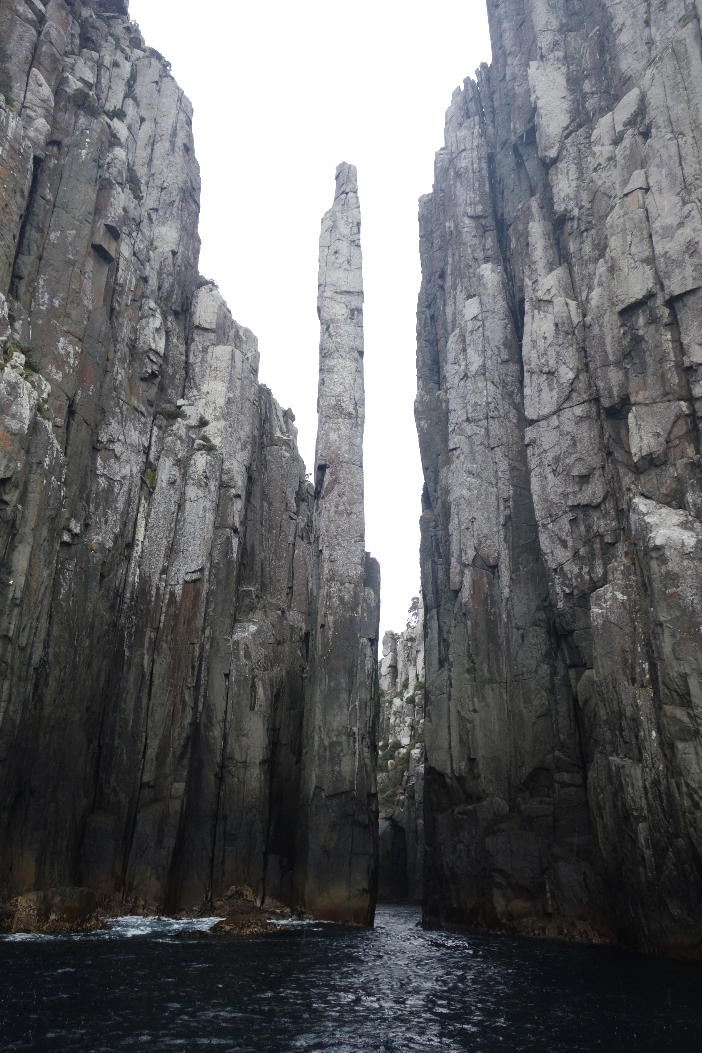 I was stearing the picture from the old climbing magazine in Chamonix in 1998. High terrifying narrow peak stick from the ocean like a submarine periscope in front of Stockholm' s seaclifs. It looked like it could wanish to the waves any minute. So narrow it was. But yet I wanted to climb it even if I did not know could I. Unfortunately that comercial picture did not contain any information about the place where it stands neither the name of the rock formation. 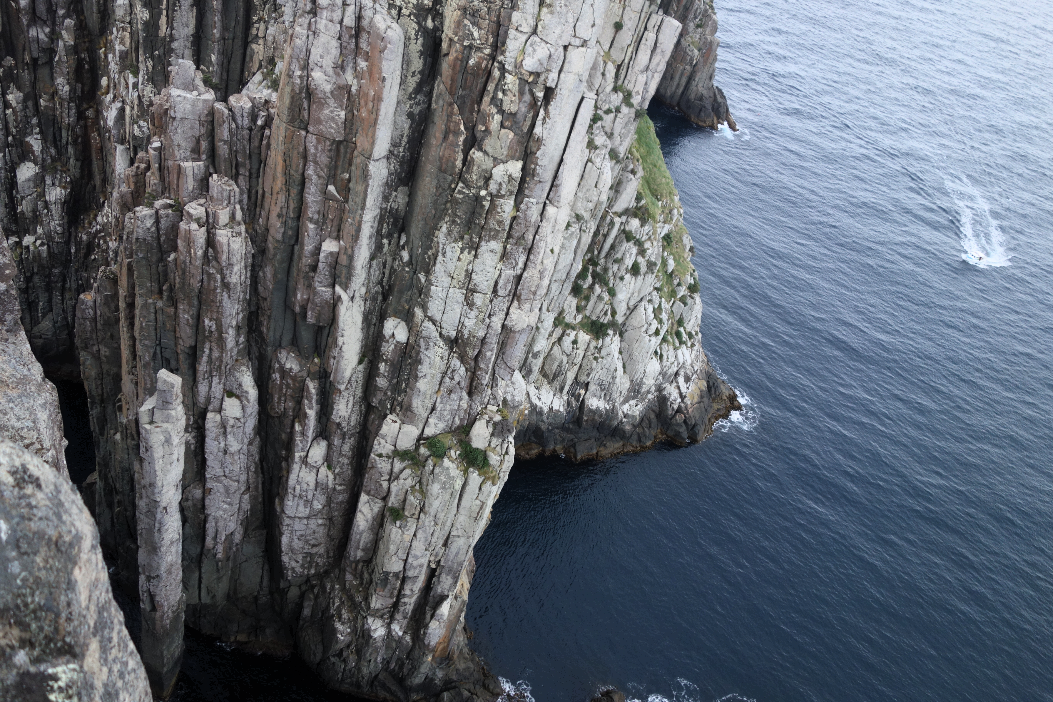 About ten years later I almost jumped out of my pants when I looked blog pictures of my friends Enni and Pauli. They were around the world trip and climbed that narrow needle of the rock. I was so glad that I finally got the name of my daydreams: THE TOTEM POLE. Now I knew that the peak was in Tasmania, quite isolated containing 2 hours strenuous approach walk and belayer get easily wet by roaming waves. So the only difficulty wasn't the grade 25. 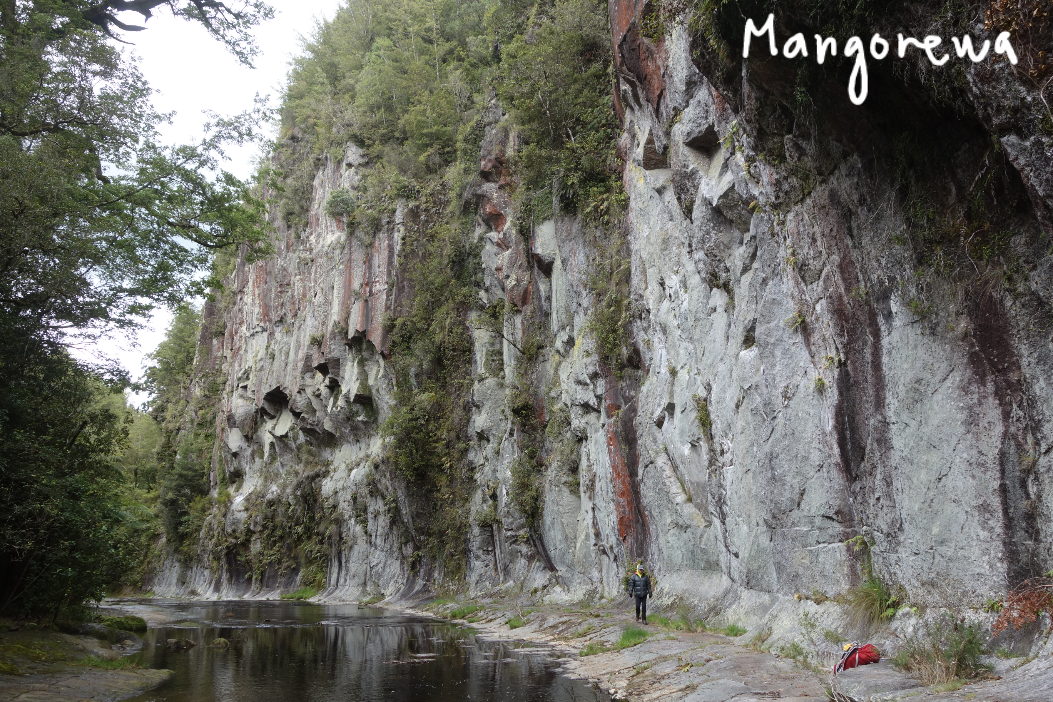 In New Zealand. I picked up one 25 grade route in Mangaorewa and hardly managed top roped moves. I did not realized that traveling had eated my climbing ability so much. Nobody answered to my request to go climb totem pole from the climbing forum and I fail to catch the local guide for a company. So my changes to do it were quite poor. 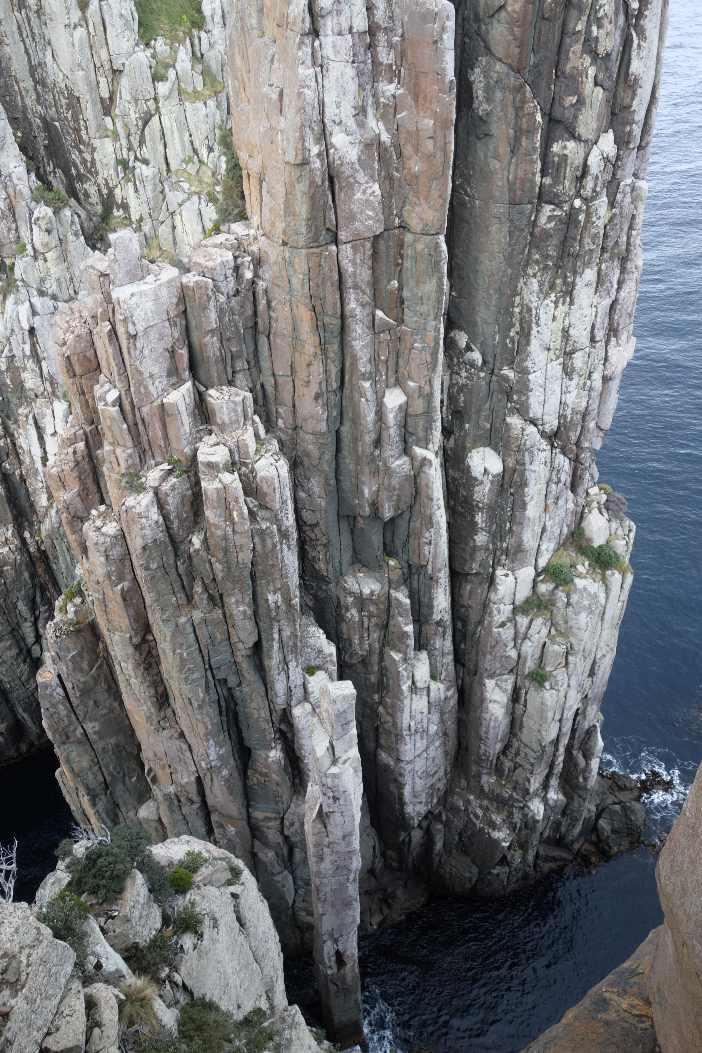 At least I wanted to see it! So we drove late in the evening to Fortescue bay where the path starts. I was so keen to see it that I run to it before the night falls. Weather was calm. Sunset was beautiful and the totem pole was astonishing but frightening at the same time. I spend 15 minutes to scout the place and ran back 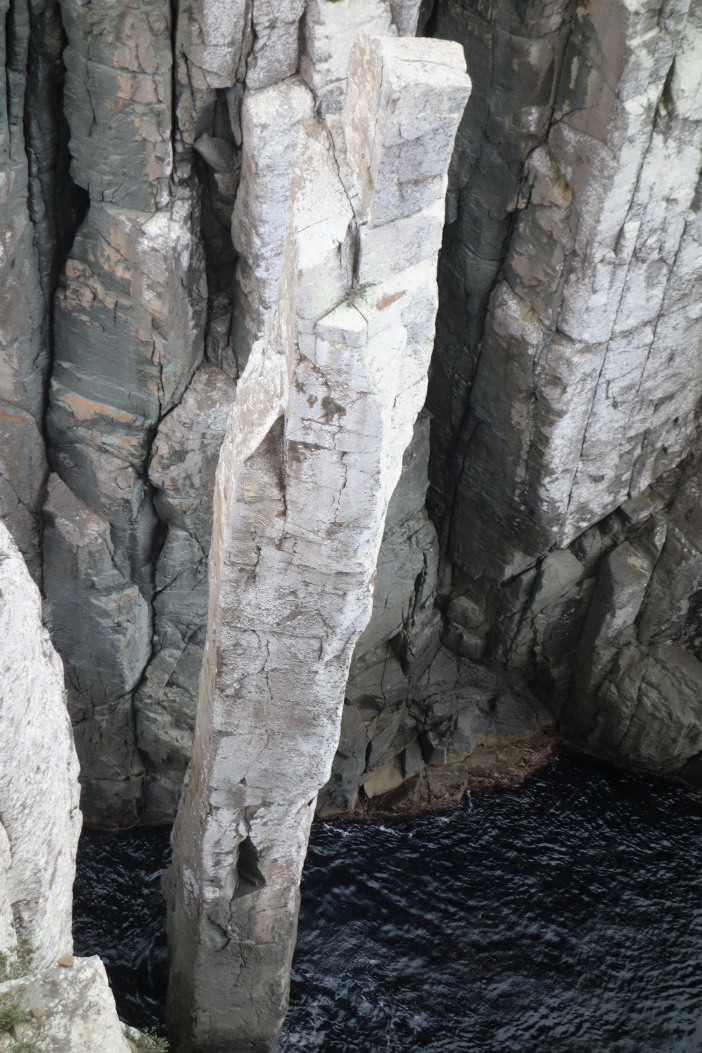 The camping place was full of boat trailers and men who were spending weekend holiday. In one corner I saw more high tech tents so I got this grazy idea. I walked there and asked:
-Are you gona climb totem pole tomorrow?

Men, Bruce and Nick, replied that no, but they are going to see it. Then I suggested if they would like to do totem pole with me. I had just 2 problems. Me and J were runing out of the water (another story) and I didn't have carrot hangers (7) for the bolts of Totem Pole. It ended up that Bruce gave water to us and Nick had 6 carrot hangers so we could survive. 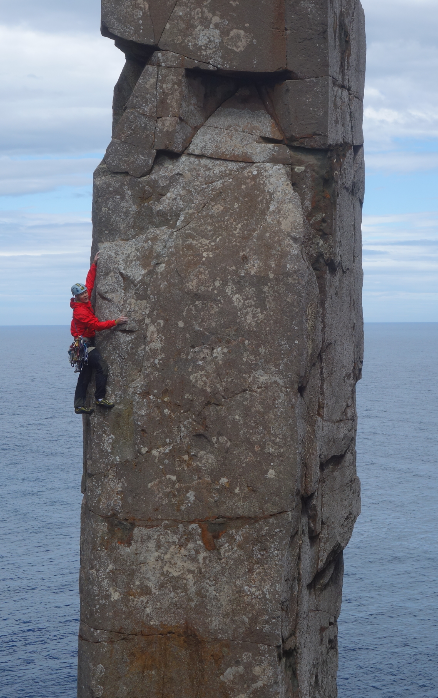 Next day we woke up at 5.45 am. Weather looked good so I went to wake up our new friends: suprisingly young looking dad and his 23 years old son. When we arrived next to the Totem it started to rain and wind was getting stronger. I was happy that I did not have to climb. I was quite tired because of lack of sleep and previous day runing trip. I tought that I don't have to save my energy so I ran back from totem in 45 minutes when given walking time is 2 hours. Steep stairs made my calfs wery stiff and sore. 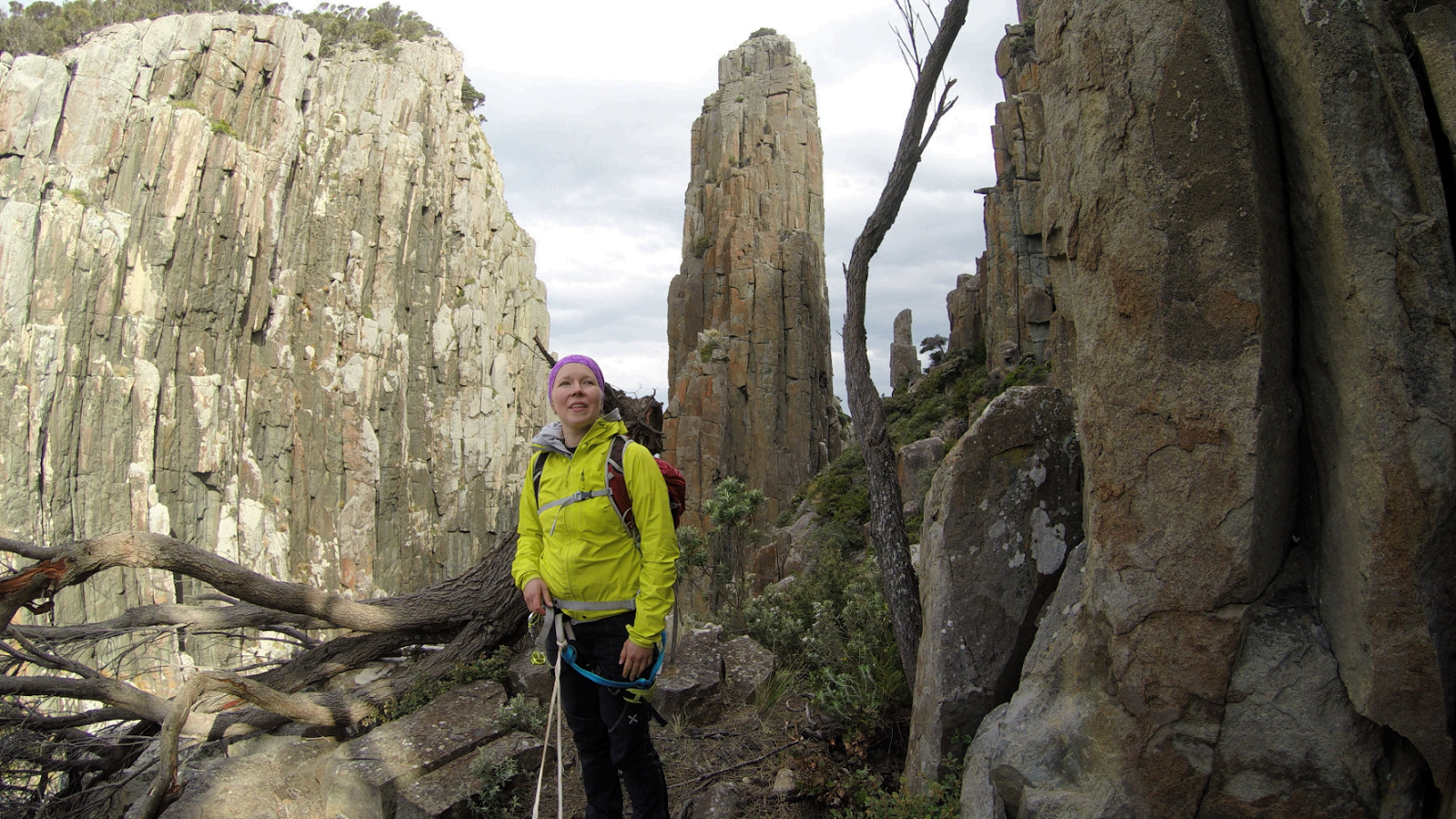 We were bailing but instead of turning back we decided to scout climbers path and belay anchor for the next attempt. During this activity weather turned better and J courage me to speak Nick for the climb that we don't have to come back here. I knew that this is maybe the last change of my life to touch the totem pole so I agreed. 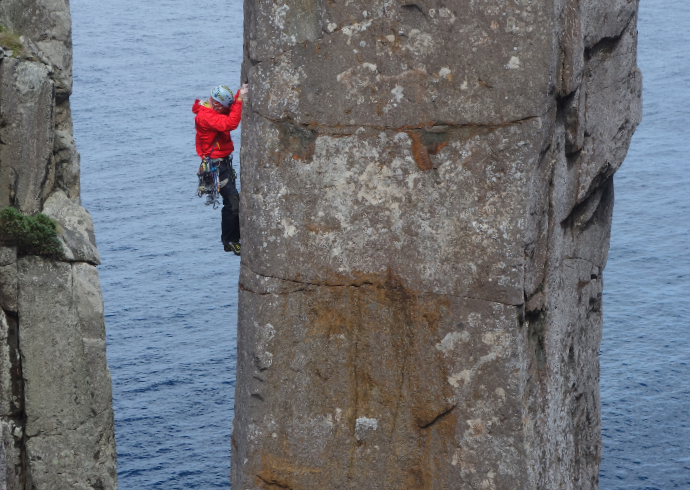 "You never know when the next good weather window will appear and I think this is the momentum of the good adventure. The most important thing and maybe most difficult thing is to make the right decision. I have to tell you that I had been in hard places and also seen hard routes with high reputation and maybe bad stories behind routes. Still most of them have turned to victory when I just decided to go for it. We can cut the totem in pieces and rest in every bolt if we want to. And when we are higher we can even fall safe. I don't blame you if you don't want to go. We don't even know each others and this is still quite epic climb." I tried my best to convinced Nick but I wasn't so sure about myself. Luckily Nick said: "Ok let's do it"

I wave my climbing gear to Nick and said: "I will carry my courage with my gears" I have as much courage as I have gear until the gravity pulls me off the rock 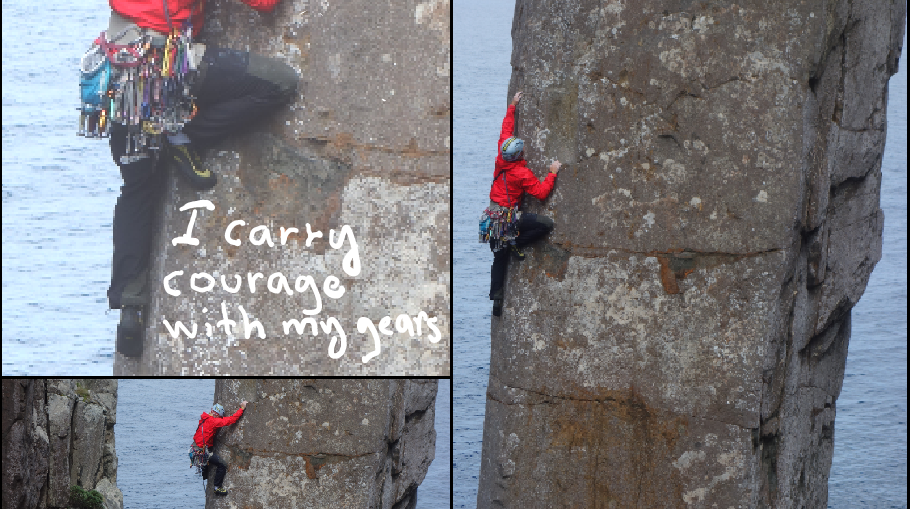 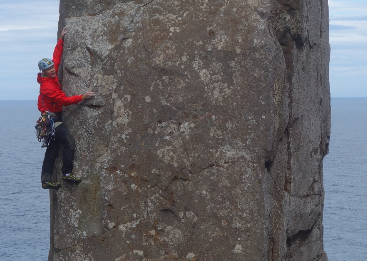 I knew I don't have enough endurance to on sight the route. I decided not to let my self to get too pumped. So I would rest in every bolt if nesesary. I did not wanted to fall violently when my wife is watching neither to cause any dangerous situation to my partner. As a senior climber I felt that my responsibility is to secure that my super nice and brave partner can return to main land where his dad was waiting. 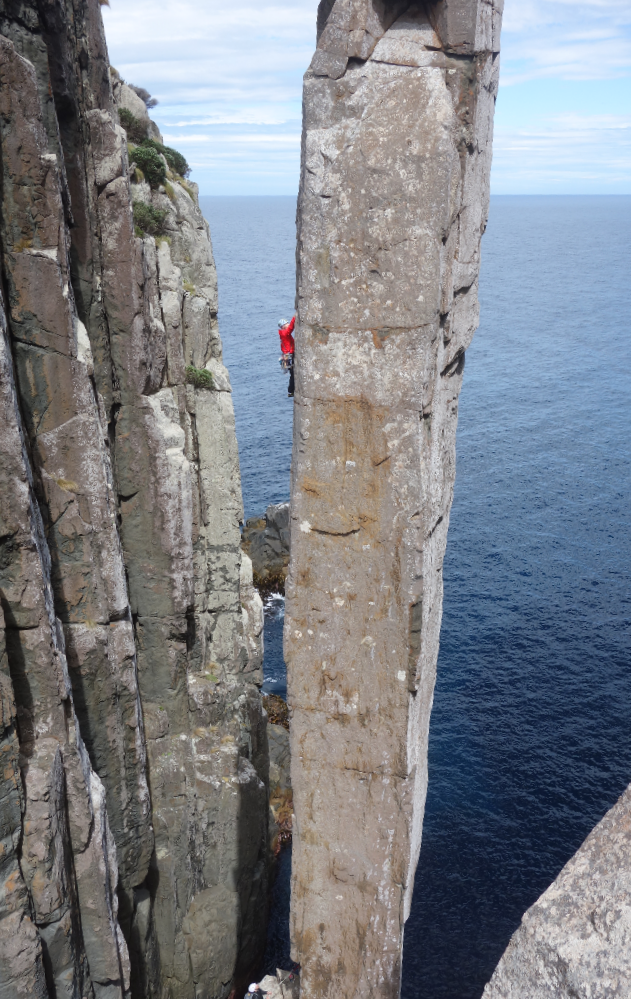 I started rapelling at 12 pm when it was the low tide. When I got the bottom I was surprised. There was hangers in place so I did not have to use Nick's hangers. I was lucky and managed to swung and attached mysself directly to Totem. I touched the rock and I felt that we made right decision. My climbing plan worked and I did not fell at all. Instead I rested in the bolt when I needed to. I did not got this climb in to my belt but I am still very satisfied about the totem. The route contains a very good climbing. Bolting was just perfect. Enough spacious that you can't use bolts as a bolt ladder and you still need to use your own gear. 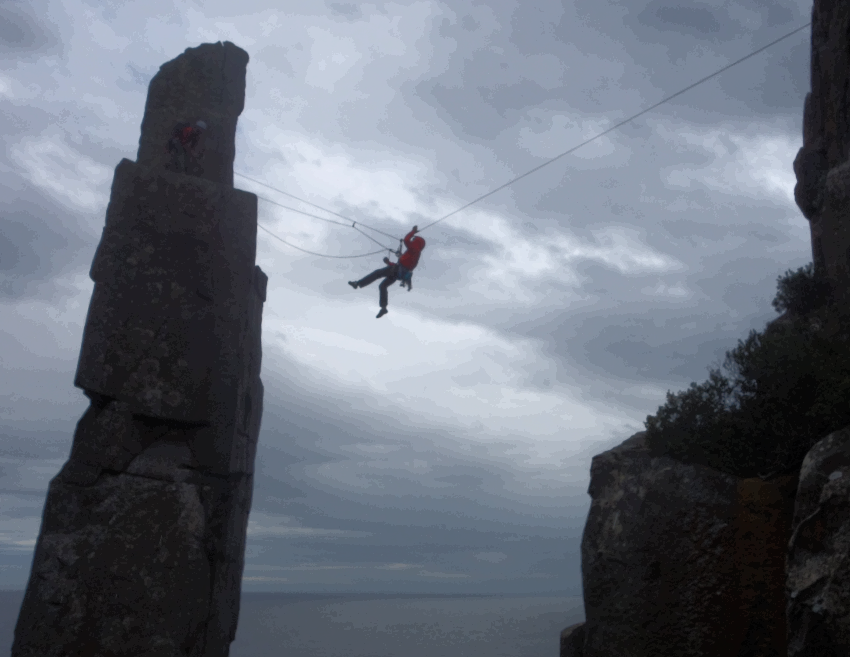 This is the rare climb where you really need to do tyrolean traverse. And that was incredible fun! I really respect those first ascentionists who made this - maybe the most beautiful climbing route on earth. 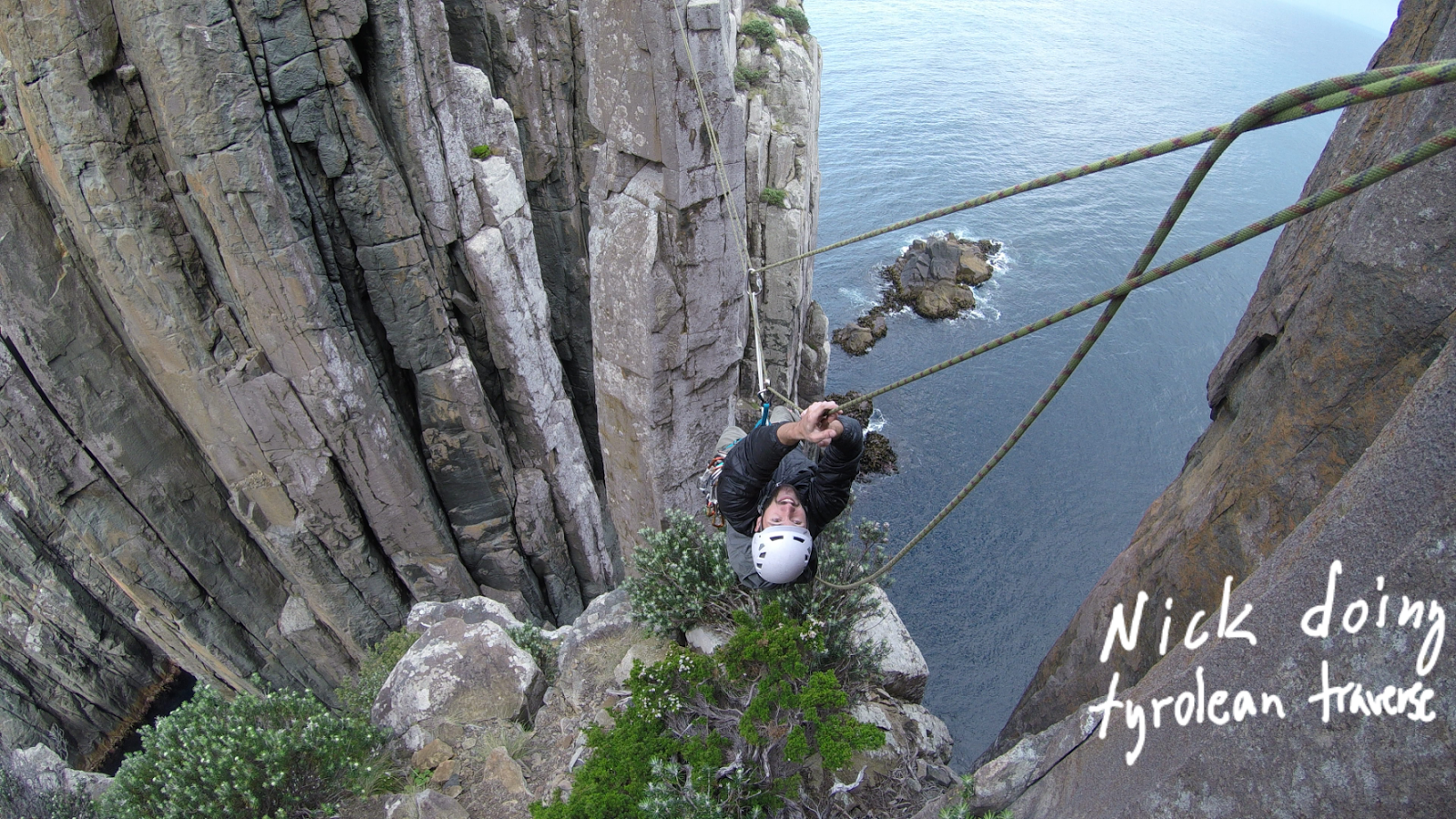 And Nick- if you ever read this: You are a very brave man because you dare to climb with this kind of strange old man. I think you will have many beautiful climbs in front of you. You were the best company for that day that I could imagine. Thank you.

Ps. Sorry Pirjo! I accidently destroyed all videos from the trip but in this link is a very good video from the route:

Video from The Totem Pole

RAUTAPARI tells stories about our outdoor living. We are a finnish couple behind the artic circle. In fall 2014 we were in a round the world trip and now we are building a house.